A mixed bag of food chat tonight — and a shortish one. I’m tired! (Too much eating, perhaps?!)

I ate Thai for dinner twice this week. Didn’t really mean to — it just kind of happened.

First up was a visit to the new Fai Thai restaurant downtown on Moore Square, in the old Duck and Dumpling spot. Chef William D’Auvray has apparently kitchen hopped from just-down-the-street’s Bu-ku.

The ambience at Fai Thai is very hip. My favorite element was the lighting. Lights within and behind colorful paper lanterns and umbrellas glowed softly down from the ceiling. Very nice.

The menu explains that Fai Thai serves up rustic and traditional Thai edibles, many grilled or slow roasted over coconut and mangrove wood. My friend Tobi and I tried several dishes — there are plenty of shareable items. The hands-down star was Kanom Bung Goong — translated to prawn toast.

I’ve noticed a recent trend at restaurants to use the more sophisticated “prawn” term instead of good ol’ “shrimp.” I don’t care what you call them, as long as they taste good. And Fai Thai’s do indeed. 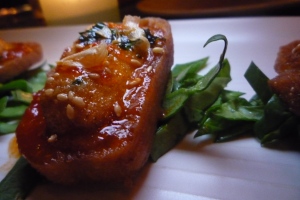 Now, apparently I’ve heretofore had only very mediocre shrimp toast in a number of Chinese restaurants. But these toasts were ultra-crisp yet not brittle, and the minced shrimp topping was very flavorful. Perfectly composed and fried, they were easy to eat. The toasts were served on top of shreds of fresh spinach and were accompanied by three tasty self-serve toppings: fish sauce, cilantro chutney and sweet chili sauce. An awesome, awesome appetizer.

Thai dinner #2 was In a Hurry Green Curry from one of my favorite food blogs, 101 Cookbooks. I cook Heidi Swanson’s healthy vegetarian recipes regularly. Tonight’s was as promised — a bright, simple and quick green curry. The only change I made was to use Thai-flavored baked sprouted tofu. Yummy.

Yes, I was at Ballymor again. And yes, of course I had a Guinness. But this time I actually also ate a full meal.

My main was a good roasted salmon glazed with honey whiskey sauce, a really good mushroom risotto and sauteed asparagus. But the highlight of the evening was a stuffed mushroom appetizer that Debbie, Don and I shared.

Goodness. Consider: an oyster in the shell, topped with a mixture of crab meat, cheese, tiny bits of Irish bacon, breadcrumbs and a lemon dill buerre blanc sauce. Ummmm.

I’m not crazy about the texture of oysters, but the toppings kind of masked it. I could still taste the oysters just fine. And all the other elements as well. A standout that I’ll be noshing again, no doubt.

Surely there’s no one who lives in my neck of the woods and hasn’t ever eaten at a K&W. Is there?

Now, I must admit I’m not a huge K&W fan, but the place has many, many loyal regulars, including a lot of older early-bird diners. Bless their hearts.

Today I found myself there with my book club.

Here’s what I had today: salmon patties with a full saucer (really) of tartar sauce, turnip greens that I liberally doused with pepper vinegar and scalloped tomatoes. The turnip greens and tomatoes were delish. (We’ll forgo a discussion about the salmon patties, shall we … ) 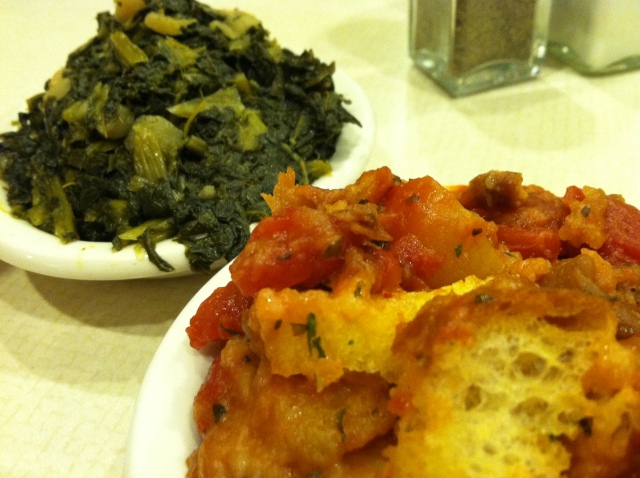 If you’ve never had scalloped tomatoes I’m not surprised. It’s a very old-fashioned dish. From what I can tell, it’s a mushy, savory sort-of-pudding made of cooked-down tomatoes, bread and sugar. Sounds weird, but it’s good, trust me.

Even if I don’t adore a lot of K&W’s offerings, dining there once in a while is a kind of odd cultural experience.

I'm a passionate foodie who started this "temporary" blog during a gustatory tour of Tuscany. I decided to continue, since I love to dream about, plan for, prepare, eat and write about food!
View all posts by atarheeltastes →
This entry was posted in Raleigh, NC, Restaurants, Uncategorized and tagged 101 cookbooks, ballymor, bu-ku, curry, fai thai, guinness, k&w, oysters, prawn toast, pub grub, raleigh, salmon, scalloped tomatoes, southern, turnip greens. Bookmark the permalink.