The world at my feet

Posted on October 3, 2011 by atarheeltastes

Okay, I do miss Austin’s fantastic food scene. But I still count myself lucky to live in a city where I can enjoy Indian, East African, Japanese, Dutch and good ol’ American food in one week.

Last Saturday was one of my favorite annual events, the International Festival. It’s impossible for people like me — full of wanderlust and foodie zeal — to resist the pull of 20+ booths serving samples of foods from all over the globe.

My first course was a plateful of delicious yakisoba from the Japan booth. This noodle dish was one of my favorites when I lived in Okinawa as a teenager, but most area restaurants serve it all gussied up and far too sweet. The International Festival’s version is light and fresh and the closest I’ve found to what I enjoyed on “The Rock.”

Second course was an East African samosa and Maharagwe Ya Nazi, or red beans cooked in coconut milk  and served over rice. A simple, comfort-food dish.

Many festival-goers flock to the France booth to wait in line for crepes and cake and pastries. But it is my longstanding personal tradition to enjoy Dutch donuts and rusk.

Rusks are are kind of like super-crispy and crumbly toasts shaped like half a bagel half without the hole. (They remind me of Zwieback toasts.) At the International Festival they’re smeared with a thin layer of some type of creamy spread and then topped with chocolate sprinkles. A perfect contrast to the rich and heavy donuts, the rusks are ultra-light in sweetness and texture.

The Dutch goodies were so good, in fact, that I only remembered to snap a photo near the very end of dessert, when there was only a smidgen of rusk remaining.

Last night some girlfriends and I gathered for excellent camaraderie, conversation and comestibles at Mantra, a very new and chic Indian eatery in downtown Raleigh.

I love any and all types of Indian food: fancy fare from a frou-frou place (don’t you just love alliteration?) or plain and simple curries from a dingy hole in the wall. But many Indian restaurants — whatever town or city hosts them — tend to have in common disturbingly similar menus, with a wide variety of all-too-familiar dishes. 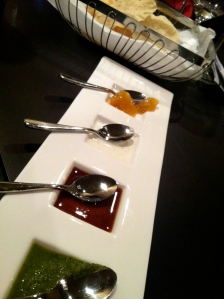 Over the last few years in the Triangle area, several establishments have opened that push the envelope of Indian cuisine beyond the conventional favorites. Mantra is one of those places.

We shared several appetizers that were bountiful enough to seriously threaten our desire for entrees! But we were wielding big coupons and bravely forged ahead anyway …

Though not much to look at (at least not in my photo), my favorite starter was Kurkuri Bhindi — very thinly sliced okra, barely breaded and lightly fried. Crispy, salty and spicy — just fantastic.

We also shared a Vegetable Khazana, or assorted appetizer platter that included a samosa, tandoori paneer tikka, some type of spicy pattie and aloo papdi chaat. It was a nice assortment of flavors, textures and colors — definitely the way to go if you’re dining with others, want to try several things and/or don’t know much about Indian food. 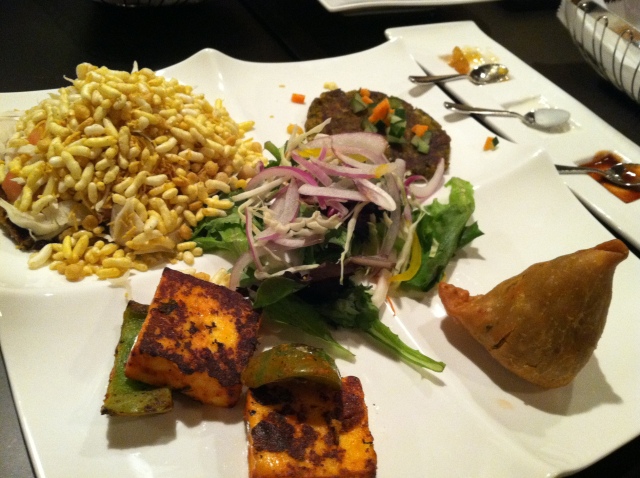 I can’t remember the name of my main course! Either my brain is even more sieve-liked than ever, or the online menu is slightly different from the one we ordered from last night. Regardless, my entree was chock-full of vegetables and — for once — as spicy as requested. (Most of the time I’m disappointed when I ask for a high-ish spice level in Indian or Thai restaurants and am presented with pretty meek and mild heat.)

Even though we were stuffed to the gills (and I have a hearty portion of my generous entree stashed in the freezer), two of us hadn’t yet spent the requisite amount the coupons demanded and we were forced to order dessert. (Poor us!) 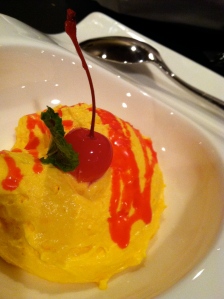 The server recommended the mango mousse, both because of its deliciousness and lightness. Excellent recommendation. Bright, fluffy and very mango-ey.

I look forward to returning to Mantra often. Probably sooner than later to try the lunchtime thali.

It just might become my go-to, upscale Indian favorite. (The ambience is serene and beautiful. Check out the website’s gallery — which unfortunately doesn’t show the great patio.)

Seaboard Cafe — often fondly referred to as Logan’s (for the plant nursery where it’s located) — is a favorite of inside-the-beltline ladies who lunch, and also us working stiffs. The menu consists of pretty straightforward but fresh-and-good sandwiches, salads, soups and such. It’s lovely spot, open to the air during temperate weather, glass-wall-encased but still bright on cool days like today — always surrounded by plants, and often with trains rumbling past.

I used to bounce back and forth between a few regular menu items and sometimes daily specials, but for the last couple of years I’ve been stuck on the grilled tuna, swiss and cranberry sandwich. Sounds kind of weird, I know. I would never have thought to combine those three, but it’s so delicious I even tried to duplicate it at home (and failed).

I can’t believe I haven’t yet written about it. 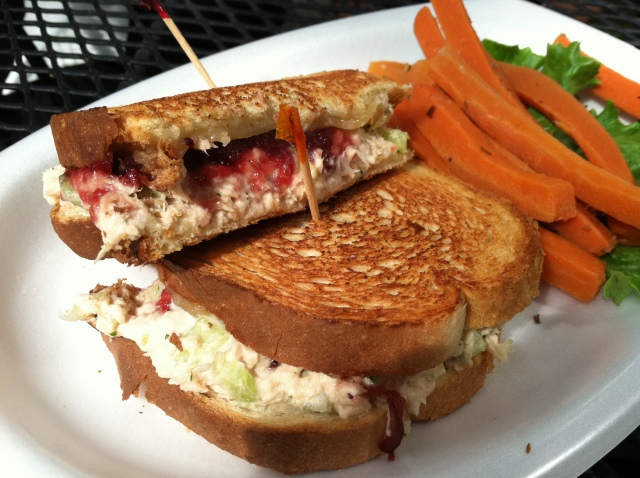 The tuna salad is wonderful, the cheese nicely melted and a tad sharp and the cranberry jam (or relish or whatever it is — the secret ingredient I was unable to mimic) adds a nice tart sweetness and pretty color. Served with a side of pickled carrots (I’m not a huge carrot fan, but am crazy about these), it’s a lunch that always pleases.

I'm a passionate foodie who started this "temporary" blog during a gustatory tour of Tuscany. I decided to continue, since I love to dream about, plan for, prepare, eat and write about food!
View all posts by atarheeltastes →
This entry was posted in Raleigh, NC, Restaurants. Bookmark the permalink.