Bless me father, for I have sinned

Posted on February 6, 2012 by atarheeltastes

It’s time for a confession. On several levels.

First, guess why you haven’t heard from me in a week? Because I’m following an oil-free, alcohol-free vegan diet! And frankly, so far there’s been nothing exciting enough to blog about.

And now I’m going to blaspheme, so all you Engine 2 adherents out there should just turn away now before your feelings get hurt.

Why a vegan diet? Several reasons. All my clothes are tight. And my I’m-a-98%-pescatarian claim dropped quite a few percentage points over the last few months. So I figured I’ll go vegan for a bit, lose some weight and get back on track with healthier eating.

I’d been hearing a lot about the popular Engine 2 diet. (Its fans are almost cult-like in their enthusiasm!) And the book’s author — a “plant strong” (he doesn’t like to use the divisive and sometimes inflammatory “vegan” term) triathlete and firefighter — is certainly extremely healthy, and awfully nice to look at.

So I watched a screening of the movie Forks Over Knives (sponsored by my local Whole Foods), bought the Engine 2 book and enjoyed a talk and Q&A with E2’s Rip Esselstyn.

I’ve been on the E2 plan for a week, and am already getting bored and fidgety.

I don’t mind eating vegan some of the time. There’s no doubt — from both medical and scientific perspectives — that a plant-based diet is better for my body and the earth. I know I shouldn’t drink so much cow’s milk. Humans don’t really need it, and it’s phlegm-producing. Yuck. (And after trying soy and rice milk in years past — ho hum — I’ve now discovered that almond milk is pretty damn tasty. Especially when you accidentally purchase the sweetened kind. It makes the best hot cocoa ever!)

Heck, a few recipes from the years my daughter decided to eat vegan are still in my regular rotation. (Find them at the end of this post.)

And take a gander at tonight’s dinner: 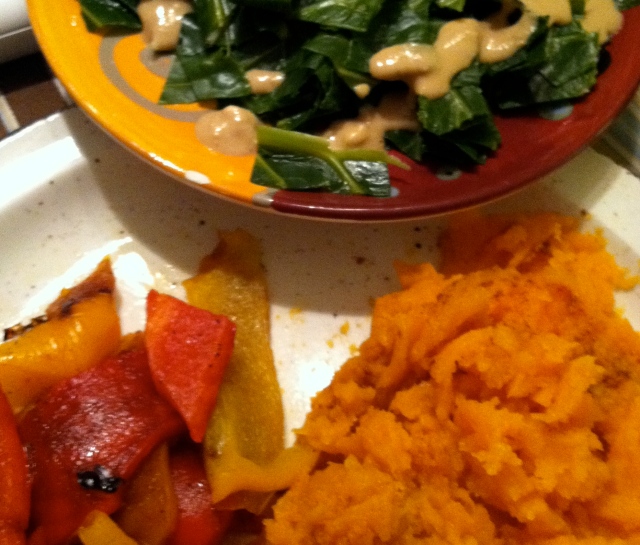 Beautiful! Colorful! Fresh! Healthy! Yes, all those. But exciting? Something to look forward to and savor? Not so much.

I love veggies and fruits and whole grains, don’t get me wrong. And I eat more of them than many people I know.

But give up my straight-from-Chianti, pressed-in-November extra virgin olive oil that tastes so bright and grassy? That sprinkling of cheese that instantly adds zing and depth to a dish? A luscious brownie rich with chocolate and eggs and butter? Never eat gelato again as long as I live?

As a foodie, I have to confess that I simply can’t be a vegan on a permanent basis. Well, I can, I suppose — more truthfully, I should say I won’t.

I’ll stick to E2 for the 28-day challenge put forth in the book. No oil. No alcohol. Nothing that comes from any type of animal. I’ll hopefully lose a few pounds and feel oh-so-clean-and-light. And then I’ll return to my 98% pescatarian ways, partaking in other animal flesh only as a special treat once in a while when traveling. I’ll cut down on dairy, pull back from too many, too often rich indulgences. Plant strong, yes. Plant only, no.

And I understand that if I chose to eat the E2 way forever I might add a few more years onto the end of my life. But I’m willing to trade those years of lackluster eating for a slightly shorter life enriched by food, glorious food.

But hey … everybody else can do whatever they please. You eat your way, and I’ll eat mine.

Here are the yummy vegan recipes I promised. Maybe you’d like to try them on Meatless Mondays.

Preheat oven to 350. Grind the almonds in a blender or food processor. Add the oil, Braggs, water, vinegar, garlic and spices and blend well. Put the mushrooms upside down in a baking dish, tightly side-by-side in one layer. Top with onions, pour sauce on top and bake for 20-25 minutes. Serve over rice.

Saute onions and garlic in sesame oil over medium-high heat until translucent. Cut heat back to medium, add the rest of the ingredients except for the rice, and simmer for 5 minutes. Serve over rice.

I'm a passionate foodie who started this "temporary" blog during a gustatory tour of Tuscany. I decided to continue, since I love to dream about, plan for, prepare, eat and write about food!
View all posts by atarheeltastes →
This entry was posted in Recipes. Bookmark the permalink.

6 Responses to Bless me father, for I have sinned