Why oh why did I never get around to eating at Durham’s venerable Magnolia Grill until its very last month in operation?

I don’t really need to ask — I know my rationale all too well. I’ve found that many (not all) restaurants that are successful and in operation for many years and become “institutions” sometimes rest on their laurels and start to slip. Stuck in a kind of culinary time warp, innovation falters and mediocrity ensues.

There are always so many newer and (seemingly) more exciting restaurants popping up throughout the Triangle that Magnolia Grill was on my neglected I’ll-get-to-it-one-of-these-days list.

So when the Barkers announced last month that they’d close the restaurant’s doors at the end of May I immediately tried to get reservations. No luck. (I later heard that they were solidly booked for the entire month in less than two hours, and had to take the phone off the hook for a couple of days.)

So my newlywed friends and fellow food lovers Sean and Victoria and I risked trying to walk in. (Well, it wans’t that huge of a risk — the website announced they’d accept walk-ins on a first-come, first-served basis.)

I got to Magnolia Grill at about 4:45 last Saturday in anticipation of the doors opening at 5. We were 19, 20 and 21 in line, and were lucky enough to get three of the last five seats in the bar.

Our poor bartender, making drinks for a fully-booked restaurant and serving so many full meals! (He did so with finesse, by the way, and earned overly generous tips from our party.)

Now I know what the fuss was all about, and I sure do regret only exercising the privilege of dining at Magnolia Grill a single time.

But what a time it was!

As is my habit when faced with a fantastic menu, I narrowed down choices to several starters and entrees, and the bartender/server delivered his firm opinions when I asked for them. (There’s nothing I hate more in a server than no opinion. “Everything’s good!” or “Well, it depends on which of those sounds more appealing to you” just drive me crazy.)

Out of my three courses, the bookends were best. I started with a delightful grilled asparagus, mushroom and frisee salad with apple bacon, a fried egg, bearnaise aioli and mushroom essence. 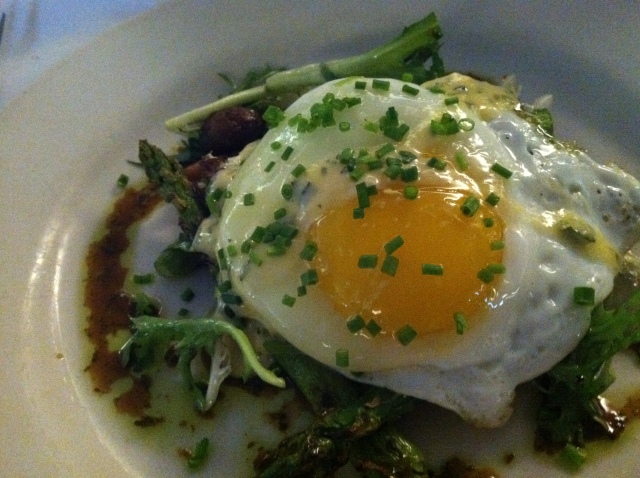 It was absolutely fabulous. I didn’t eat the bacon, which was thickly cubed, but it lent a wonderful smokiness to the dish. (I know people love their bacon, and I used to, as well. But in the years I’ve been a mostly vegetarian I’ve really lost my taste for it. It tastes kind of burnt to me now. Sacrilege, I know …) The egg was cooked sunny side up, and the rich, runny yolk and sauce together were velvety and packed full of taste.

For my main, I chose grilled sea scallops in meyer lemon vinaigrette with a spring “stew” of English peas and diced sweet onions, potatoes, carrots, radishes and house-cured ham. I loved how the scallops were cooked — all the way through yet still tender. (Even though it’s very trendy, I don’t like when they’re just seared and left kind of cool and gelid in the center.)

Every single element was ambrosial. I was a teensy bit frightened of a delicate panna cotta made with goat cheese, which can be a bit assertive. But just enough cheese was used and actually elevated the sophistication of the custard to a new level. The cherries were as succulent as you’d imagine they’d be, poached in wine and all. And the cookies were light and crunchy, yet rich and full of flavor. I hated to finish it.

We rolled out of Magnolia Grill stuffed to the gills and giddily happy at 7:30, still full daylight outside, joking about having joined the early-bird special generation.

While I’m sad on the one hand to only have experienced Magnolia Grill once, I’m happy on the other hand that I won’t have to worry about subsequent less-than-perfect visits. It was a meal that will linger in my memory for quite some time.

I applaud Ben and Karen Barker for retiring while still at the top of their game, and for not selling Magnolia Grill to someone who couldn’t possibly have operated it like they did for so long.

Thank for the memory, and happy retirement.

I'm a passionate foodie who started this "temporary" blog during a gustatory tour of Tuscany. I decided to continue, since I love to dream about, plan for, prepare, eat and write about food!
View all posts by atarheeltastes →
This entry was posted in Restaurants. Bookmark the permalink.